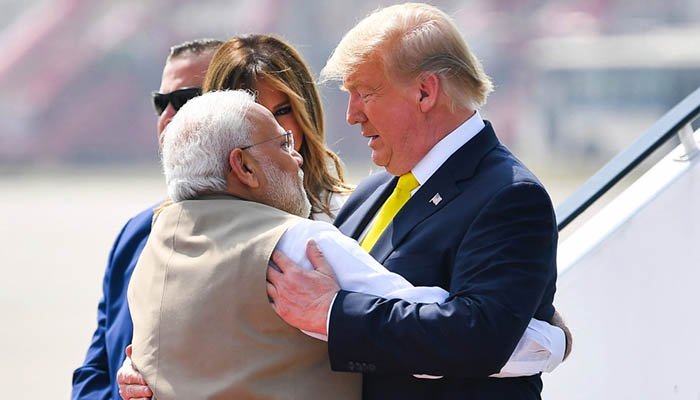 US President Donald Trump and Indian Prime Minister Narendra Modi have called on Pakistan to ensure that its territory is not used to ‘launch terror attacks’, according to a joint statement issued by the White House following the conclusion of the US leader’s two-day visit to the neighbouring country.

In the statement, the two sides also “denounced any use of terrorist proxies and strongly condemned cross-border terrorism in all its forms.”

Islamabad has repeatedly and vehemently denied similar accusations leveled by New Delhi in the past, pointing to India’s own disastrous policies in occupied Kashmir and its stridently anti-Muslim agenda for fanning resentment elsewhere in the country against New Delhi.

“They call on Pakistan to expeditiously bring to justice the perpetrators of such attacks, including 26/11 Mumbai and Pathankot [attacks],” said the joint statement.

The two leaders also called on Islamabad to launch “concerted action against all terrorist groups, including Al-Qaida, Daish, Jaish-e-Mohammad, Lashkar-e-Tayyiba, Hizb-ul Mujahideen, the Haqqani Network, TTP, D-Company, and all their affiliates.”

Just a few days earlier, Trump had, at a rally in Ahmedabad, said: “Since taking office, my administration is working in a very positive way with Pakistan.”

“Our relationship with Pakistan is a very good one. Thanks to these efforts we are beginning to see signs of big progress with Pakistan and we are hopeful for reduced tensions, greater stability and the future of harmony for all of the nations of South Asia.”

A day later, he had also offered to mediate between Pakistan and India, especially with respect to Kashmir.

In their joint statement, Trump and Modi have vowed to strengthen a United States-India Comprehensive Global Strategic Partnership, which they said was anchored in mutual trust, shared interests, goodwill, and robust engagement of their citizens.

The White House said that President Trump and Prime Minister Modi agreed to “deepen defence and security cooperation, especially through greater maritime and space domain awareness and information sharing; cooperation; exchange of military liaison personnel; advanced training and expanded exercises between all services and special forces; closer collaboration on co-development and co-production of advanced defence components, equipment, and platforms; and partnership between their defence industries.”

During the visit, the US leader also reaffirmed India’s status as a major defence partner, which gives New Delhi the highest consideration for procurement and technology transfer purposes.

In the statement, the US lauded “India’s role as a net provider of security, as well as developmental and humanitarian assistance in the Indian Ocean Region”.

The two leaders also agreed to work together to strengthen and reform the United Nations and other international organisations.

On Afghanistan, the statement said that Washington and New Delhi “share interest in a united, sovereign, democratic, inclusive, stable, and prosperous Afghanistan”.

During the visit, President Trump also “welcomed India’s role in continuing to provide development and security assistance to help stabilize and provide connectivity in Afghanistan”.