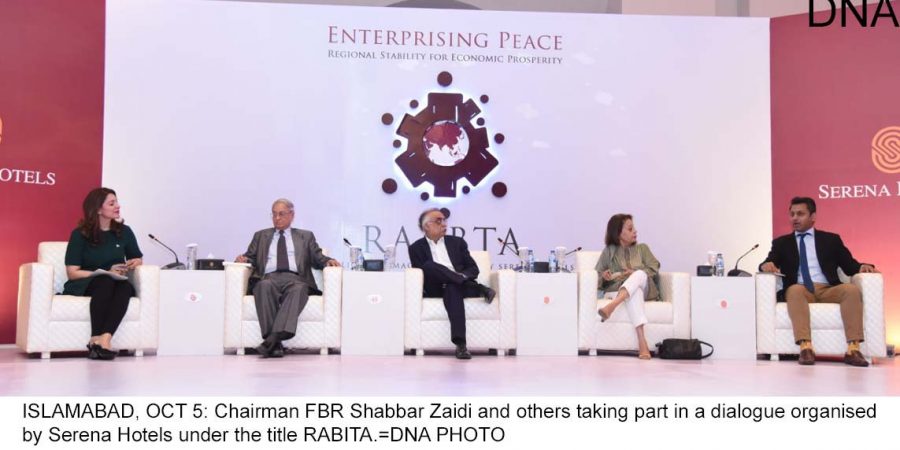 The discussion revolved around regions and states that are not necessarily in overt conflict, but that are institutionally and economically weak and vulnerable to international threats and instability. 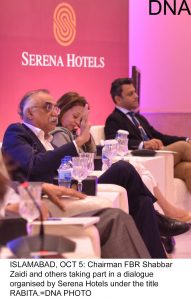 ISLAMABAD, OCT 5: Chairman FBR Shabbar Zaidi and others taking part in a dialogue organised by Serena Hotels under the title RABITA.=DNA PHOTO

Shabbar Zaidi said, “The first thing we have to establish in Pakistan is consistency and stability in our system and policies. In the last 20 years, $6 billion per year have been transferred out of Pakistan and this figure is reported in the Supreme Court of Pakistan.

The investment percentage in Pakistan is one of the lowest in the region. Since, at least, 1990s there has been a serious outflow of the real investment from Pakistan. Why? It is due to economic instability.

A good economist will not invest unless he thinks 50 years ahead.” When asked about the impact of the Indian conflict with Pakistan on the confidence of businessmen, Mr. Zaidi retorted,

“The Indian threat is strength for Pakistan as it unites them, but the issue of disparity within Pakistan is a bigger threat to us.”

Dr. Professor KhalidaGhous said that Islamophobia is seen through the lens of religion alone, whereas other interrelated issues like immigration and assimilation play a role too. She further remarked, “Radicalization is multifaceted. It is present in the largest democracy – the Indian society, and the secular American society as well. Post 9/11 and due to the marginalization of the Muslim minority communities and the type of legislation, the economic migrants were unable to be integrated into the Western society.”

Fahd Husain remarked that one fundamental weakness of Pakistan, in this time of global connectivity and global narratives, is that we are allowing other people to craft our story for us.

He said, “The state of Pakistan has failed to appreciate the impact that a global story can have. We have not built the infrastructure through which we can tell our story.

That infrastructure, in other words, is a strategic communication policy system.”

Ambassador Naqvi said, ”The global politics, in the 21st century, has seen a very striking transformation. All the old patterns and links of global politics have been blurred.”

He gave the example of how China being a strong friend of Pakistan has thriving trade relationships with India; similarly, how Russia being decades old ally of India is reaching out to Pakistan. In that context, external peace is very important but there is no connectivity in this region.

Mr. Aziz Boolani, CEO Serena Hotels, said, “Raabta is the culmination of the value that Serena Hotels brings to the society.

The convening power of Serena allows us to bring together experts, policy makers and the interested citizenry to inform and engage individuals and organizations in advancing debate, create knowledge and develop a wider appreciation of complexity of all socio-economic subjects.”=DNA 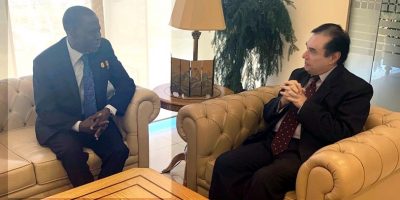 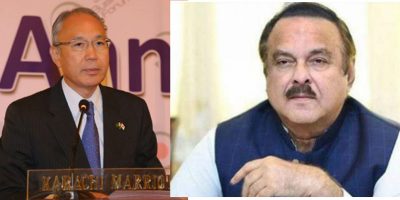