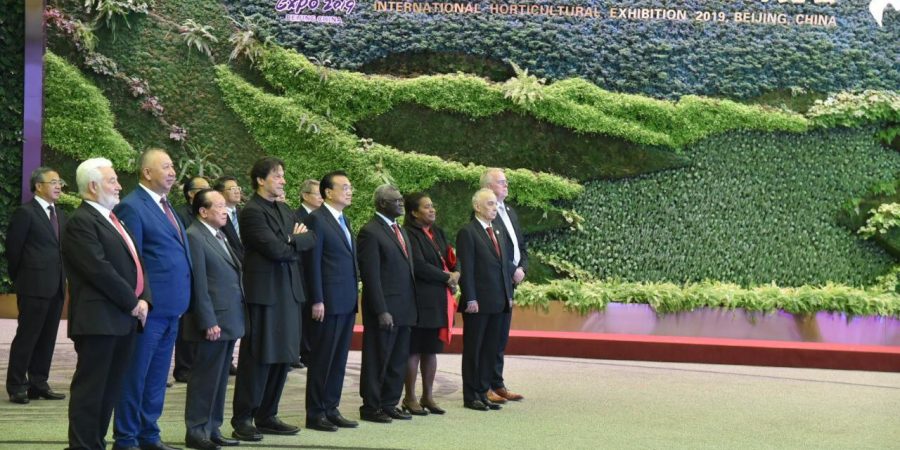 Prime Minister Imran Khan met Chairman National People’s Congress, Li Zhanshu, today at the Great Hall of the People. The Prime Minister was accompanied by Foreign Minister, Minister of Railways, Special Assistant to the Prime Minister on Energy and other senior officials.
Congratulating Chairman Li on 70th anniversary of the founding of the People’s Republic of China, Prime Minister reiterated that Pakistan and China were close friends, steadfast partners and ‘iron brothers. Prime Minister underlined that China’s economic transformation in last few decades had been very impressive and worth emulating. He particularly noted that Pakistan wanted to learn from China’s experience of poverty mi…
[17:52, 09/10/2019] Faisal Ilyas Pm House: Pakistan-China Joint Press Release

At the invitation of H.E. Li Keqiang, Premier of the State Council of the People’s Republic of China, H.E. Imran Khan, Prime Minister of the Islamic Republic of Pakistan, visited China from October 8-9, 2019. During the visit, Prime Minister Imran Khan called on H.E. Xi Jinping, President of China, held a meeting with Premier Li Keqiang and met with H.E. Li Zhanshu, Chairman of the Standing Committee of the National People’s Congress. Prime Minister also met Chinese entrepreneurs and businessmen.

Leaders of the two countries had in-depth exchange of views on a wide range of bilateral, regional and international issues of mutual interest. Meetings were marked by traditional warmth, mutual understanding and strategic trust. Prime Minister Imran Khan also attended the Closing Ceremony of the Beijing Horticulture Expo 2019 as a chief guest. Prime Minister Imran Khan congratulated the Chinese leadership and people on the 70th Anniversary of founding of the People’s Republic of China. He felicitated China for its remarkable growth and underscored that the reform and opening up process of China was a model for developing countries. He maintained that the steady march of the Chinese nation under its visionary leadership towards national rejuvenation was becoming a reality.

Recalling the Joint Statement of November 4, 2018, which outlined the important bilateral consensus between Pakistan and China, the two sides reaffirmed their firm resolve to further strengthening Pakistan-China All-Weather Strategic Cooperative Partnership aimed at building a Community of Shared Future in the New Era.

Stressing that the close ties, deep-rooted friendship and strategic partnership between Pakistan and China served the fundamental interests of the two countries and peoples, and contributed to peace, stability and development in the region, the two sides reaffirmed their support on issues concerning each other’s core interests. Chinese leaders reiterated solidarity with Pakistan in safeguarding its territorial sovereignty, independence and security. The Pakistan side reaffirmed its commitment to the One China Policy. Supporting One Country Two Systems, Pakistan reiterated that affairs of Hong Kong were China’s internal matter and all countries should uphold international law and basic norms of non-interference in internal affairs of other countries.

The Pakistan side briefed the Chinese side on the situation in Jammu and Kashmir, including its concerns, position, and current urgent issues. The Chinese side responded that it was paying close attention to the current situation in Jammu & Kashmir and reiterated that the Kashmir issue is a dispute left from history, and should be properly and peacefully resolved based on the UN Charter, relevant UN Security Council resolutions and bilateral agreements. China opposes any unilateral actions that complicate the situation. The two sides underlined that a peaceful, stable, cooperative and prosperous South Asia was in common interest of all parties. Parties need to settle disputes and issues in the region through dialogue on the basis of equality and mutual respect.

Pakistan side underscored that the China-Pakistan Economic Corridor (CPEC) was a transformational project. A CPEC Authority was established to oversee the expeditious implementation of CPEC projects. Both sides maintained that the second phase of CPEC will promote industrial and socio-economic development in Pakistan. Pakistan side also underlined that the Gwadar Port has been granted various facilities enabling it to become a trade and logistical hub for the region. The two sides expressed determination to speedily execute CPEC so that its growth potential can be fully realized making it a high-quality demonstration project for BRI.

The two sides maintained that the ninth session of the Joint Cooperation Committee (JCC) to be held in November in Islamabad would further fast-track implementation of the ongoing projects and explore new avenues of cooperation, including ML-1. The two sides underlined that Chinese investment in Special Economic Zones (SEZs) and collaboration in SME sector would further expand Pakistan’s industrial base and diversify its export base.

Both sides agreed to jointly study identified projects by the Pakistan side in power, petroleum, gas, agriculture, industrial and infrastructure sectors. Those projects were entrusted to the concerned Joint Working Groups (JWGs) for deliberation and subsequent consideration by the Joint Coordination Committee (JCC).

The two sides held in-depth exchange of views on deepening bilateral cooperation in the areas of trade, investment, finance, defence and security, education, agriculture, social sector, people-to-people contacts and cultural linkages. Both sides renewed their commitment to reinforce sister-city ties and were happy to note that a major event was being organized in Islamabad in November 2019 to deepen cultural cooperation and people-to-people ties between the two countries.

Both sides underlined that educational links between the two countries were becoming stronger. Prime Minister Imran Khan thanked Chinese leadership for providing opportunities to Pakistani students to study in China. He hoped that those students will play an important role in further deepening historic and deep-rooted ties between the two iron brothers.

Prime Minister Imran Khan thanked the Chinese leadership for China’s consistent support for Pakistan’s economic development. The two sides agreed that early implementation of the Second Phase of the China-Pakistan Free Trade Agreement would contribute to increase in bilateral trade. Both sides agreed to take full advantage of the China-Pakistan Joint Economic and Trade Commission to achieve balanced and sustainable development of bilateral economic and trade cooperation.

The leaders reviewed the excellent bilateral defence cooperation and agreed to further strength this cooperation in the areas of military exercises, training cooperation, personnel exchanges, and equipment and technology cooperation.

Reaffirming that there was no military solution in Afghanistan, the two sides agreed that peace and stability in Afghanistan was vital for regional security and expressed satisfaction at the important outcomes of the Third China-Afghanistan-Pakistan Foreign Minister’s Dialogue held in Islamabad on 7 September 2019. The Chinese side appreciated Pakistan’s efforts in promoting peace and reconciliation process in Afghanistan. Both sides maintained that an inclusive, and Afghan-led and Afghan-owned peace process would be key to bring peace and stability in the country.

Both sides reaffirmed their commitment to fight terrorism in all its forms and manifestations, and called on all countries to strengthen international cooperation on counter-terrorism. China appreciated Pakistan’s unrelenting efforts and tremendous sacrifices in countering terrorism. It supported Pakistan in implementing its National Action Plan and called on the international community to objectively recognize Pakistan’s contributions to regional peace and security through its success in fight against terrorism.

Both sides expressed satisfaction over the close cooperation between the two countries at multilateral fora and resolved to deepen strategic coordination and consultation. Both sides reaffirmed their commitment to the purposes and principles of the UN Charter, and support for multilateralism and win-win cooperation.

During the visit, Premier Li Keqiang and Prime Minister Imran Khan witnessed the signing of the various Agreements/MoUs.

Prime Minister Imran Khan thanked the leadership and people of China for their warm hospitality, and invited the Chinese leadership to visit Pakistan at a mutually convenient time.