PM lauds Egyptian companies’ interest to invest $1b in Pakistan 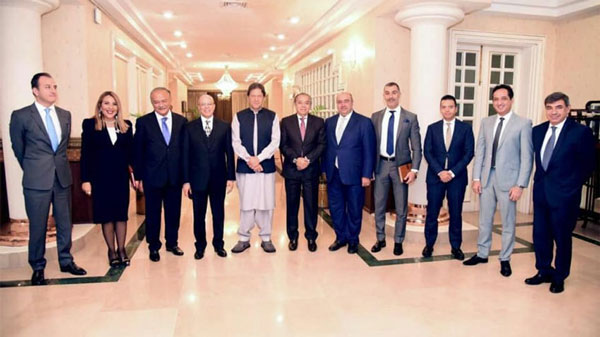 Prime Minister Imran Khan, welcoming the interest shown by Egyptian companies to invest US $ one billion in Pakistan has  said  that the government would fully facilitate Egyptian investors and entrepreneurs so that they could carry out their profitable trade activities in the country.
He was talking to a delegation of distinguished traders from Egypt which called on him here.
Special Assistant to PM on Information and Broadcasting Dr Firdous Ashiq Awan, Special Assistant to PM Syed Zulfiqar Abbas Bukhari, Chairman Naya Pakistan Housing Authority Lt. Gen (R) Anwar Ali Haider, Chairman Board of Investment Zubair Gillani were present in the meeting, which was also attended by Egyptian Ambassador in Pakistan, Ahmed Fadel Yacoub.
The Prime Minister said that there was huge potential to translate the existing Pakistan-Egypt brotherly relations into strong economic ties.
He called for promotion of bilateral cooperation between Pakistan and Egypt at all levels to tackle the common challenges faced at international level, specially, the negative propaganda about Islam so that the two countries could complement each other’s efforts in this respect. Appreciating the services of Egypt’s Jamia Al-Azhar, the Prime Minister said that in order to tackle the challenges faced by Islam, there was a need to further promote cooperation among Islamic countries in the area of education.
Highlighting Pakistan’s new energy policy, he said the present government had fully strived to promote renewable energy sector, adding the interest shown by Egyptian companies in this respect was encouraging.
The prime minister while talking about health sector said that since the present government had the vision of a disease-free Pakistan, there was also a need to have enhanced Pak-Egypt cooperation in the area of healthcare.
Members of the Egyptian delegation while expressing their full confidence in the vision of Prime Minister Imran Khan and his government’s business-friendly policies said that the Egyptian companies were keen to invest in Pakistan’s housing, energy, health and other sectors.
They said that the people and business community of Egypt fully recognized the vision and leadership qualities of Imran Khan, wanted to contribute in translating the vision of Naya Pakistan into reality. The delegation, which was highly appreciative of the Prime Minister’s speech during the 74th session of UN General Assembly, said the way Imran Khan raised his voice with argument for the protection of the rights of Muslims, was laudable.
Besides, El Sewedy Electric, a renowned Egyptian company expressing its intention of investing US $ 500 million in Pakistan’s energy sector, the delegation said that the Egyptian companies were keen to invest US $ one billion in Pakistan over the next one year in energy sector and prime minister’s five million housing project.