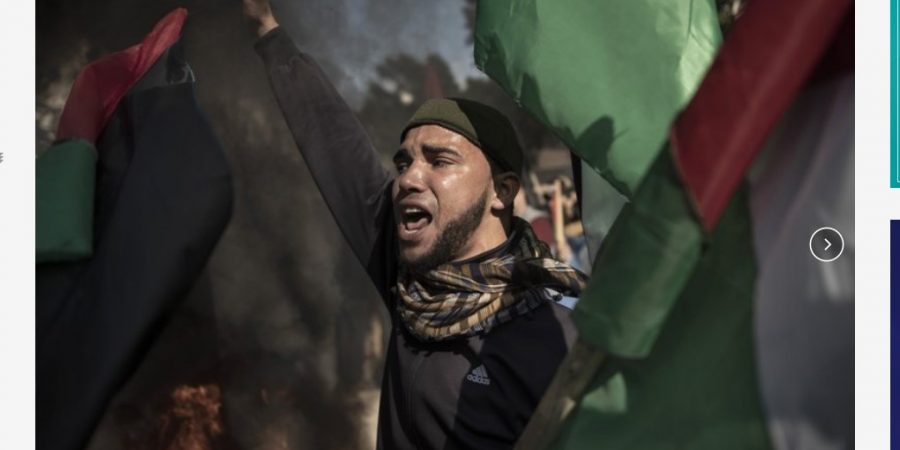 The Palestinians remain committed to ending the Israeli occupation and establishing a state with its capital in east Jerusalem, Abbas said at a news conference in the West Bank city of Ramallah, where the Western-backed Palestinian Authority is headquartered.

“After the nonsense that we heard today we say a thousand no’s to the Deal of The Century,” he said.

“We will not kneel and we will not surrender,” Abbas said, adding that the Palestinians would resist the plan through “peaceful, popular means.”

The Islamic militant group Hamas rejected the “conspiracies” announced by the U.S. and Israel and said “all options are open” in responding to the Trump administration’s plan.

“We are certain that our Palestinian people will not let these conspiracies pass. So, all options are open. The (Israeli) occupation and the U.S. administration will bear the responsibility for what they did,” senior Hamas official Khalil al-Hayya said as he participated in one of several protests that broke out across the Hamas-ruled Gaza Strip.

Abbas held an emergency meeting with other Palestinian factions, including Hamas, to discuss a unified response to the plan. Abbas had rejected the deal before it was announced saying the U.S. was hopelessly biased toward Israel.

The Palestinians cut off all contacts with the Trump administration after it recognized Jerusalem as the capital of Israel more than two years ago and moved the embassy there.

Late on Tuesday, Palestinian protesters clashed with Israeli forces on the outskirts of Ramallah, near the Jewish settlement of Beit El.

He said the EU would “study and assess the proposals put forward.” He reiterated the bloc’s commitment to a “negotiated and viable two-state solution that takes into account the legitimate aspirations of both the Palestinians and the Israelis, respecting all relevant U.N. resolutions and internationally agreed parameters.”

U.N. Secretary-General Antonio Guterres said the United Nations supports two states living in peace and security within recognized borders, on the basis of the pre-1967 borders, according to his spokesman.

“The position of the United Nations on the two-state solution has been defined, throughout the years, by relevant Security Council and General Assembly resolutions by which the Secretariat is bound,” the spokesman, Stephane Dujarric, said.

Those resolutions call all Israeli settlements in the West Bank illegal and call for a solution based on borders before the 1967 Arab-Israeli war, with agreed land swaps.

Saudi Arabia said it appreciated the Trump administration’s efforts and encouraged the resumption of direct talks between Israel and the Palestinians “under the auspices of the United States.” The kingdom’s Foreign Ministry tweeted that it hoped to see the peace process move forward in order to reach “an agreement that achieves the legitimate rights of the Palestinian people.”

Jordan, meanwhile, warned against any Israeli “annexation of Palestinian lands” and reaffirmed its commitment to the creation of a Palestinian state along the 1967 lines, which would include all the West Bank and Israeli-annexed east Jerusalem.

Foreign Minister Ayman Safadi warned of “the dangerous consequences of unilateral Israeli measures, such as annexation of Palestinian lands.”

Egypt urged Israelis and Palestinians to “carefully study” the plan and said it appreciates the administration’s efforts.

The Egyptian Foreign Ministry said in a statement Tuesday that it favors a solution that restores all the “legitimate rights” of the Palestinian people through establishing an “independent and sovereign state on the occupied Palestinian territories.”

Jordan and Egypt are the only two Arab countries to have made peace with Israel.