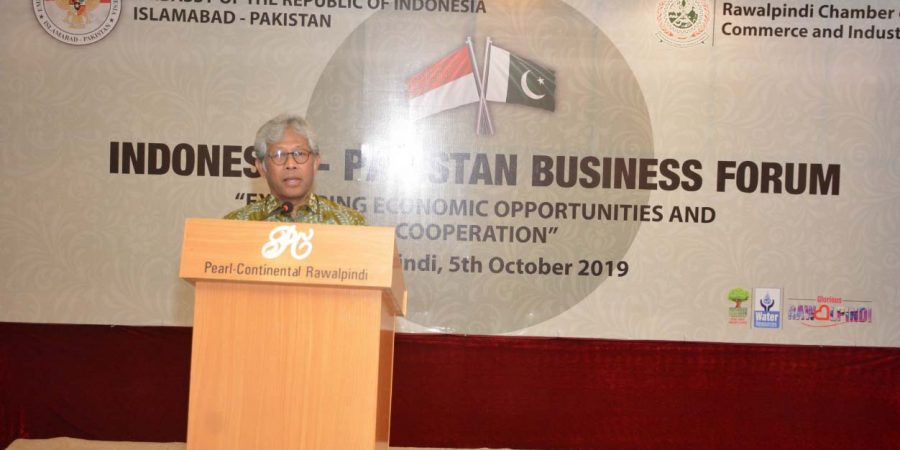 RAWALPINDI, OCT 5 (DNA) –Ambassador of Indonesia Iwan S Amri has said bilateral relations between the two countries have got new dimensions as both sides have decided to promote and strengthen cooperation in security field also adding recent visit of security personnel to Pakistan shall set new basis for this cooperation.

Ambassador Amri made this announcement during Pakistan-Indonesia Business Forum organized by Rawalpindi Chamber of Commerce and Industry (RCCI), at a local hotel on Saturday.

Indonesian ambassador further said the security delegation that is arriving Pakistan on Sunday will hold important meetings with Pakistani officials including Defence Ministry officials thus initiating a security dialogue between the two countries.

He said trade and economic relations between the two countries have touched new heights with trade volume reaching 3.1 billion USD. He said Indonesia happened to be Pakistan’s biggest trading partner from the ASEAN countries adding there was still potential to further expand this cooperation.

While talking about various expos held by the RCCI the ambassador said Indonesia has regularly been taking part in these expos and found them very useful and productive. He said even next year Indonesia will participate in Rawal Expo and embassy would try to fetch more and more Indonesia companies for the said expo.

The ambassador stressed to address the issue of trade imbalance and emphasized rationalization of supply and demand.

Both Indonesia and Pakistan are emerging economies with huge population therefore it is up to us to properly exploit the population potential for the ultimate good of our countries.

While talking about Kinnow exports of Pakistan, the ambassador announced that Indonesia after Russia was the biggest importer of Kinnow importer, which signifies huge potential in Indonesian markets for Pakistani Citrus.

He hoped trade and business activity between the two countries will further be improved in the coming days.

Earlier, the President of RCCI Saboor Malik in his speech vowed to further cement bilateral ties with Indonesia. He said he will be taking a big business delegation to Indonesia soon.

Group leader of RCCI Zafar Altaf said they want to organize achievement awards ceremony in Indonesia on the pattern of one they organized in Malaysia recently.

« US talks: Taliban delegation to stay in Pakistan till Sunday (Previous News)
(Next News) PM lauds Egyptian companies’ interest to invest $1b in Pakistan »