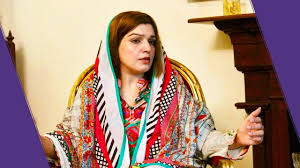 ISLAMABAD, JAN 27 (DNA) – In Indian Occupied Kashmir 176 days of siege had been passed, Indian army had demolished the world law regarding basic human rights by crushing the fundamental right of freedom in Kashmir, wife of JKLF leader Mishaal Malik said on Monday.

She said all institutions and markets remained closed on the 70th republic day India was observed as black day in IOK, the world had seen its hypocritical approach as it had sabotaged the democracy in its country while brutally strangulated the human rights in IOK.

“Nobody has a right to snatch another human being’s freedom according to International law as every human on earth has a basic right to live life with dignity and free will,”she stated.

India has no right to celebrate “a republic day” when she had crushed and strangulated the freedom of 8 million people in Indian Held Kashmir since 1947,moreover its cruelties had been unmasked by the international media, , she mentioned.

The presence of armed forces had worsen the lives of besieged people besides harsh weather condition and snowfall in the Occupied valley, she stated.=DNA