India to get matching response in case of any misadventure: DG ISPR 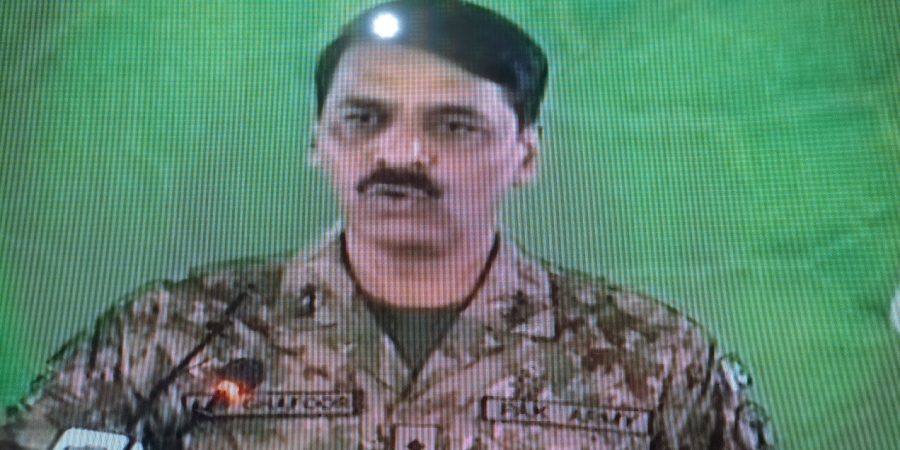 RAWALPINDI, SEPT 04 (DNA)- Director General ISPR Maj. General Asif Ghafoor said on Wednesday that India will be given  a matching response in case it decided any misadventure.

He expressed these views while addressing a press conference.

He further said Kashmir is Pakistan’s jugular vein. He said the international forces have not pursued the Kashmir case whole-heartedly that is why this issue remains unresolved.

Maj. Gen. Asif Ghafoor further said Kashmir people are undergoing worst ever persecution at the hands of barbaric Indian forces adding a genocide of Kashmiri people is also being carried out.

He said there was no hidden agenda during their last visit to US. He quoted some social media videos in which people claimed that as if there were some deals on Kashmir.

The DG outright rejected these notions and said no deal can be made on Kashmir because Kashmir issue runs in our blood.

To question that army chief extension, the DG said that army chief did not wanted to take extension however regional security situation led him to take this decision in the best national interest.

To yet another question, the DG ISPR added, Pakistani political leadership projected Pakistani case at all forums due to which the Kashmir issue now stands properly highlighted at all forums.

Maj. General Asif Ghafoor further said, the strategic capability is for deterrence. It is policy of the state and it cannot be discussed at political rallies etc.

To a question about Indian thinking of attacking Azad Kashmir, the DG ISPR said our main focus is still on Eastern border despite the fact we have challenges at the Western border also.

He said no country or no army gives its response in the press are on media. “Dont take first step till the time you have not thought of the last step”, he added.

To a question about relations with Israel, the DG ISPR said such decisions are taken by states. Pakistani passport is the only  passport where it is written that it is valid for all countries  except Israel. All such notions regarding this issue have no standing.

On Iran he said, Pakistan has brotherly relations with Iran. He said the process of Pakistan-Iran border fencing project is going well. The Iranian border security and military forces are in close contact with us.

He said Pakistan army is a professional force and it follows a chain of command. He also dispelled the impression that after army chief’s extension, a large number of military officers shall not be able to get promotions.

To a question about possible Afghan solution the DG ISPR said, the reconciliation process is continuing and progressing well.

As reports suggest, the agreement between US administration and Taliban is in final stages adding one should hope that peace shall soon prevail in Afghanistan. He said Pakistan will extend any support that would ensure peace in Afghanistan.

He said everybody should play its role to make polio drive a complete success because it is a matter of future of our children.=DNA