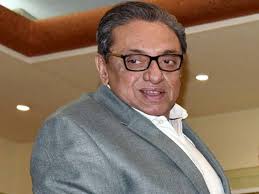 KARACHI: Chairman Businessmen Group (BMG) & Former President Karachi Chamber of Commerce & Industry (KCCI) Siraj Kassam Teli, while terming Prime Minister Imran Khan’s speech at United National General Assembly as “excellent”, stated that hats off to PM Imran Khan for vocally, vibrantly and fearlessly speaking the truth about Muslims, Islamophobia and Kashmiris which has never ever been done by any other President or Prime Minister.

Speaking at the 58th Annual General Meeting of KCCI, Chairman BMG said that irrespective of the economic and political issues, delivering such an impressive speech is not an easy thing to do at such a high level which the Karachi Chamber highly appreciates hence, the General Body Members must pass a resolution today in which Prime Minister Imran Khan must be praised for his excellent speech in which our PM rightly argued that why only Muslims are terrorists as terrorism has got nothing to do with religion.

“I don’t have words to praise PM’s speech as it was so good. Every single word deserves to be appreciated and I don’t think that the speech could be better than that”, he added.

Commenting on the economic issues being faced by the country, Siraj Teli pointed out that Karachi Chamber always opposed government’s policy to impose Regulatory Duties which, even though reduced trade deficit to an extent, but it was going to be really harmful for the economy. The government should have imposed complete ban on the import of luxury cars and those food items which are already available in Pakistan but the imposition of anti-dumping duties and other duties would lead to shrinking the economy and promote smuggling. “Regulatory duties have been imposed on so many goods yet all of them are easily available in bulk quantities all over the country due to widespread smuggling which was worsening the situation and proving unfavorable for the economy and the industry”, he added.

While urging the policymakers to bring down the exorbitant interest rates, Chairman BMG stressed that they will have to reverse the monetary policy as it has failed to yield positive results.

Referring to his conversations with Chairman FBR Shabbar Zaidi from time to time, Siraj Teli said that all the laws and policies have been devised to recover taxes from Karachi only whereas other cities and provinces have been set free and remain exempted from the taxation laws.  “We have been demanding city-wise details about tax collection and the Chairman FBR also agreed to publicize the same but no city-wise info has been made available so far. We pay 70 percent revenue and we can even pay even more but taxes must also be recovered from other cities and provinces as well and taxation policies must be strictly implemented across the board”, he stressed.

He said that 70 percent of revenue contributed by Karachi is usually denied by many who give the same old excuse that most of the Head Offices and Ports are situated in Karachi which was the basic reason for highest revenue contribution. “Move all the Head Offices, multinationals and banks from Karachi to other cities while FPCCI must also be relocated to Islamabad yet Karachi city will continue to contribute the highest without all these Head Offices and the FPCCI”, he said, while urging the government to take strict notice of large number of fake and bogus trade associations and chambers at FPCCI.