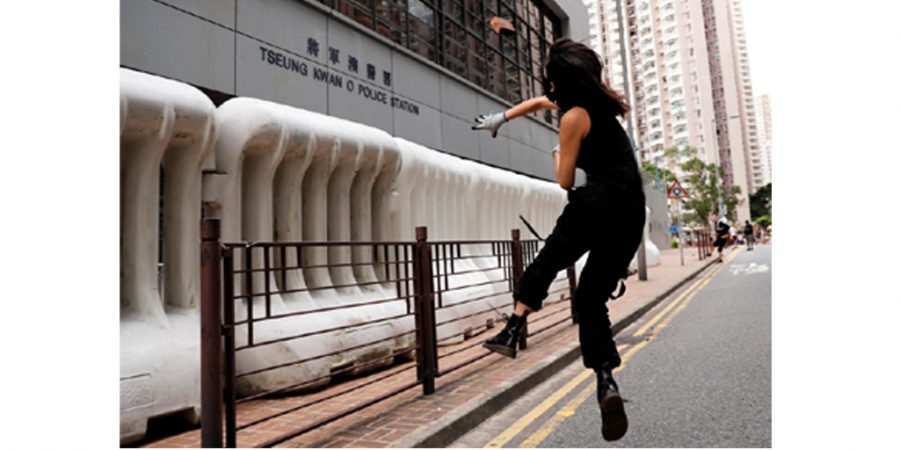 The three activists, who declined to give their real names, held the news conference in the Mong Kok neighbourhood of Hong Kong. Representatives of the protest movement have not held any news conferences since the demonstrations began two months ago.

“We call on the government to return the power back to the people and to address the demands of Hong Kong citizens,” one activist said during the news conference shown on several TV channels in Hong Kong.

The activists were speaking a day after police fired tear gas at protesters in multiple parts of Hong Kong in the most widespread and intense violence to rock the city in decades.

The news conference reflected the faceless and leaderless ethos of the protests, partly an effort by participants to avoid prosecution by the authorities.

One of the activists said that the group “was not affiliated with any political party or organisation leading the movement”.

But the group said their initiative was prompted by Mrs Lam’s announcement that the police would hold daily news conferences. The aim was to provide a platform for Hong Kong citizens to voice dissatisfaction with the government and the police, they said.

Hong Kong’s government had failed to take responsibility for the outcry gripping the city, one activist said.

He urged the government to respond to the protesters’ demands: a complete withdrawal of the extradition bill, a halt to descriptions of the protests as “rioting”; a waiver of charges against those arrested; an independent inquiry and resumption of political reform.

The protests started over an extradition bill that would have allowed people to be sent to mainland China for trial but have now morphed into a broader backlash against the city’s government and the central government of China.

The group also reiterated demands for an investigation into police actions and attacks by suspected triad gangsters on civilians on July 21.

“We strongly condemn the police for the series of violent acts and urge them and the government not to be enemies against the public,” the activist said, adding it was the police’s duty to serve and protect civilians.

In a statement on Monday, the government condemned the protesters’ acts, saying they had undermined law and order and seriously affected economic activities.