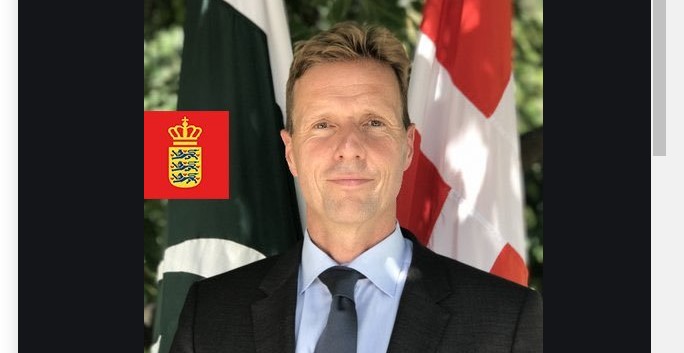 SIALKOT, JAN 29 (DNA) – Ambassador of Denmark to Pakistan, Rolf Michael Pareira Holmboe has said that Denmark and Pakistan have always enjoyed most cordial relations while Pakistan and Denmark have the best trade relationship.

He expressed these views while addressing the members of Sialkot Chamber Of Commerce and Industry (SCCI) here on Wednesday.

Mr. Rolf said I visited various Chambers to further build upon these relations to translate them into increased.

He said it is my struggle that trade relations increase between Pakistan and Denmark.

He said that the Small Medium Enterprises (SME) sector should be improved between Pakistan and Denmark.

He said that I firmly believe Pakistan can learn a lot from a close friend like Denmark in the EU investing in clean energy, artificial intelligence and skill development of it’s youth.

He said that so many companies of Sialkot are exporting their commodities to Denmark whereas the importers of Denmark are satisfied with exporters of Sialkot.

He said that the Embassy of Denmark in Islamabad is striving to increase bilateral investments and facilitates similar business ventures both in Denmark and Pakistan although with a rich history of mutually beneficial relations  I believe that both Pakistan and Denmark should ensure that dedicated efforts are taken to further improve two way trade as despite as GSP+Status and EU being the major trading market for Pakistan trade between the two countries does not reflect the true potential.

He said that the total trade volume between the two countries according to Trade Map Data is just around 300 million USD while the bilateral trade could be conveniently enhanced for which Chambers and commerce and industry can play an important role by facilitating frequent interactions between private sectors.