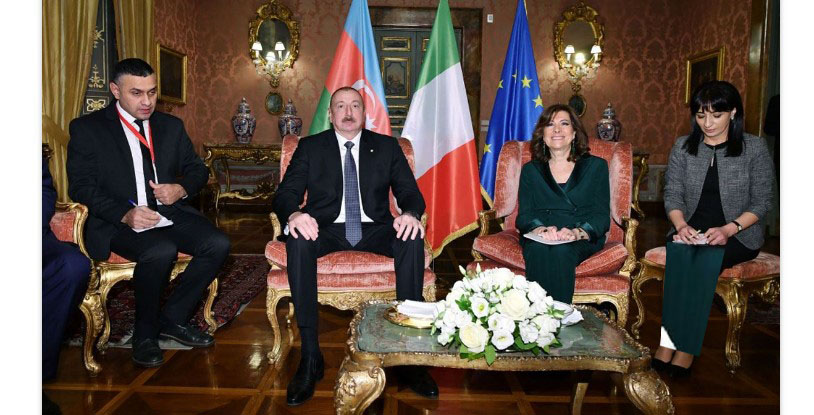 The Azerbaijani president and the president of the Italian Senate posed together for photographs.

Casellati recalled her visit to Azerbaijan and First Vice-President Mehriban Aliyeva`s visit to Rome. She noted that friendship between the two countries was rapidly expanding. Highlighting the Italian president`s official visit to Azerbaijan, Casellati said that Azerbaijan-Italy cooperation, which is based on historical ties, was developing in all areas.

President Aliyev stressed the importance of Italian President Sergio Mattarella`s official visit to Baku. The president said that this visit once again demonstrated that the bilateral relations were at a high level.

The Azerbaijani president underlined that documents signed during his state visit to Italy were of great importance. President Aliyev pointed out that the “Joint Declaration on Strengthening Multidimensional Strategic Partnership between the Republic of Azerbaijan and the Italian Republic” would raise the bilateral ties to a new high level.

It was particularly underlined that Italy was the main partner of Azerbaijan in political, economic and trade areas among the European countries.

The sides emphasized the vital importance of the interparliamentary ties, and noted that Azerbaijan and Italy cooperate within the OSCE Parliamentary Assembly, PACE and other organizations. The significance of the successful implementation of the TAP project, as well as the participation of the Italian companies in energy and other projects in Azerbaijan was stressed.