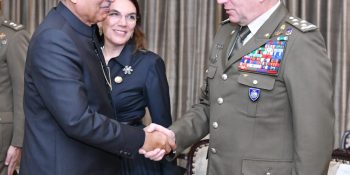 ISLAMABAD; November 07, 2019: India’s illegal and unilateral actions to alter the disputed status of Indian occupied Jammu and Kashmir (IoJ&K) and suspension of civic liberties constitute human rights violations of the people of IoJ&K, said President Dr. Arif Alvi, while talking to Chairman, European Union Military Committee, General Claudio Graziano, who called on him at the Aiwan-e-Sadr, Islamabad today. He emphasized that the world community must play its role to alleviate the suffering of Kashmiri people at the hands of fascist Indian regime, and moral principles must not beRead More 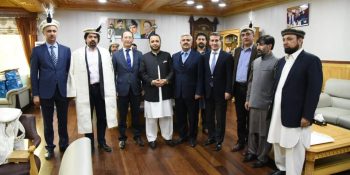 GILGIT, NOV 7 (DNA) –Ambassador of various countries visit Gilgit Baltistan in order to enjoy beauty of Northern Areas of Pakistan.   Ambassadors of Azerbaijan, Turkey, Tajikistan and Kyrgyzstan visited Northern Areas. Some of the ambassadors have also taken their families to NAs.   Ambassador of Azerbaijan in his social media message said they had a wonderful visit to the Northern Areas of Pakistan (Gilgit-Baltistan, Hunza, Skardu, Shigar) along with some colleagues. They got acquainted with the beauties of this region besides exploring the potentials of this region. HeRead More 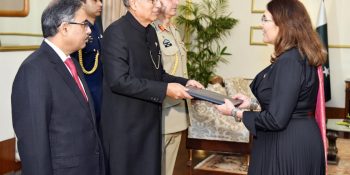 ISLAMABAD; November 07, 2019: Ambassadors-designate of European Union Ms. Androulla Kaminara and Czech Republic Mr. Tomas Smetanka presented their Credentials to President Dr. Arif Alvi in a credentials ceremony at the Aiwan-e-Sadr, Islamabad on Thursday. The President felicitated the newly appointed Ambassadors to Pakistan and hoped that they would work for further strengthening the existing ties of European Union and Czech Republic with Pakistan. Later, the Ambassadors separately called on the President. Speaking on the occasion, the President said that Pakistan was desirous of cordial relations with all friendly countries. He stressed that it wasRead More 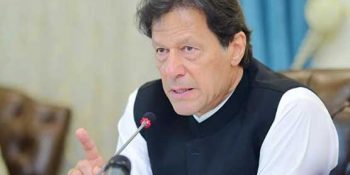 Mr. Lie Jie Chairman of the supervisory Board Huawei, along with his delegation, called on Prime Minister Imran Khan at PM Office. Chairman Board of Investment Syed Zubair Haider Gillani, Secretary Commerce Sardar Ahmed Nawaz Sukhera, Secretary IT Mr. Shoaib Ahmed Siddiqui were also present during the meeting. Chairman Lie Jie informed the Prime Minister about the progress being made by the company in the network domain. They have successfully established a new ecosystem so as to become independent of reliance on companies enjoying the monopoly in the field. WhileRead More 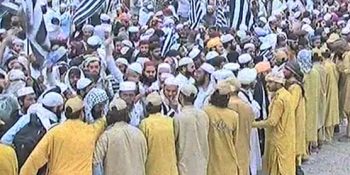 Thousands of protesters have converged on the federal capital under the banner of the Azadi March, seeking to send Prime Minister Imran Khan packing. The ‘Azadi’ March caravan, which set off from Sindh on October 27, left Punjab’s city Lahore on October 30 and culminated its journey October 31 in Islamabad.Opposition leaders delivered fiery speeches against the PTI government on Friday, giving the prime minister a 48-hour ultimatum to resign. The deadline was later extended after the JUI-F chief said the opposition’s Rahbar Committee will decide after talks with theRead More

Istanbul Airport Wins the “Airport of the Year” Award 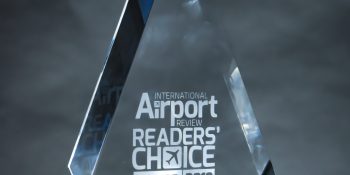 Istanbul Airport has won the “Airport of the Year” award in the “Readers’ Choice 2019” awards, organized by the International Airport Review. ISTANBUL, NOV 7 (DNA) -Istanbul Airport outdid its rivals to receive the “Readers’ Choice: Airport of the Year” award, which is awarded to the company with the most reader votes and organized by one of the world’s most prestigious publications, the International Airport Review.   Having recently completed its first year of operation, Istanbul Airport earned the approval of international authorities to become a global hub. This was thanks to the “AirportRead More